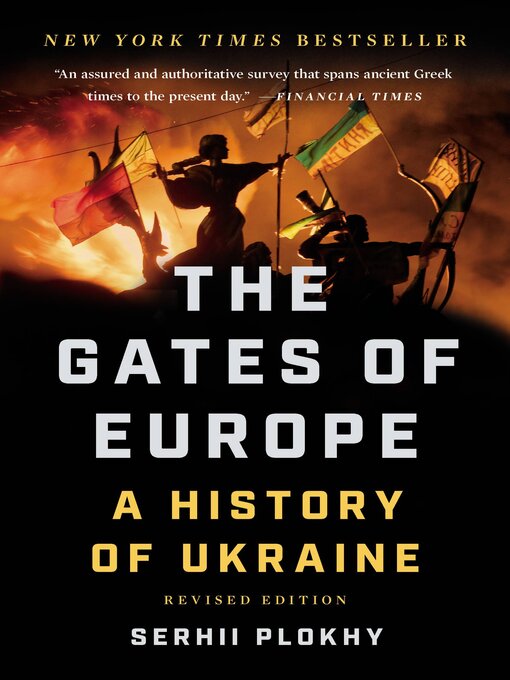 The gates of Europe a history of Ukraine

"From one of the foremost experts on Ukraine and the former USSR, a concise, authoritative history of Ukraine. Ukraine is currently embroiled in a tense battle with Russia to preserve its economic and political independence. But today's conflict is only the latest in a long history of battles over Ukraine's existence as a sovereign nation. As award-winning historian Serhii Plokhy argues in The Gates of Europe, we must examine Ukraine's past in order to understand its fraught present and likely future. Situated between Europe, Russia, and the Asian East, Ukraine was shaped by the empires that have used it as a strategic gateway between East and West--from the Romans and Ottomans to the Third Reich and the Soviet Union, all have engaged in global fights for supremacy on Ukrainian soil. Each invading army left a lasting mark on the landscape and on the population, making modern Ukraine an amalgam of competing cultures. Authoritative and vividly written, The Gates of Europe will be the definitive history of Ukraine for years to come"--

Maps
I. On the Pontic Frontier
1. The Edge of the World
2. The Advent of the Slavs
3. Vikings on the Dnieper
4. Byzantium North
5. The Keys to Kyiv
6. Pax Mongolica
II. East Meets West
7. The Making of Ukraine
8. The Cossacks
9. Eastern Reformations
10. The Great Revolt
11. The Partitions
12. The Verdict of Poltava
III. Between the Empires
13. The New Frontiers
14. The Books of the Genesis
15. The Porous Border
16. On the Move
17. The Unfinished Revolution
IV. The Wars of the World
18. The Birth of a Nation
19. A Shattered Dream
20. Communism and Nationalism
21. Stalin's Fortress
22. Hitler's Lebensraum
23. The Victors
V. The Road to Independence
24. The Second Soviet Republic
25. Good Bye, Lenin!
26. The Independence Square
27. The Price of Freedom
Epilogue: The Meanings of History
Historical Timeline
Who's Who in Ukrainian History
Glossary.