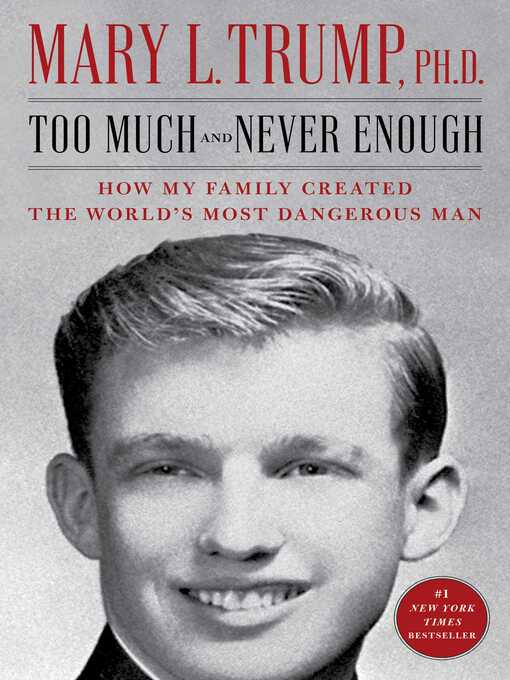 "In this revelatory, authoritative portrait of Donald J. Trump and the toxic family that made him, Mary L. Trump, a trained clinical psychologist and Donald{u2019}s only niece, shines a bright light on the dark history of their family in order to explain how her uncle became the man who now threatens the world{u2019}s health, economic security, and social fabric. Mary Trump spent much of her childhood in her grandparents{u2019} large, imposing house in the heart of Queens, New York, where Donald and his four siblings grew up. She describes a nightmare of traumas, destructive relationships, and a tragic combination of neglect and abuse. She explains how specific events and general family patterns created the damaged man who currently occupies the Oval Office, including the strange and harmful relationship between Fred Trump and his two oldest sons, Fred Jr. and Donald. A firsthand witness to countless holiday meals and interactions, Mary brings an incisive wit and unexpected humor to sometimes grim, often confounding family events. She recounts in unsparing detail everything from her uncle Donald{u2019}s place in the family spotlight and Ivana{u2019}s penchant for regifting to her grandmother{u2019}s frequent injuries and illnesses and the appalling way Donald, Fred Trump{u2019}s favorite son, dismissed and derided him when he began to succumb to Alzheimer{u2019}s." --book jacket

Part one: the cruelty is the point. The house
The first son
The great I-am
Expecting to fly
Part two: the wrong side of the tracks. Grounded
A zero-sum game
Parallel lines
Escape velocity
Part three: smoke and mirrors. The art of the bailout
Nightfall does not come at once
The only currency
The debacle
Part four: the worst investment ever made. The political is personal
A civil servant in publich housing
Epilogue: the tenth circle.