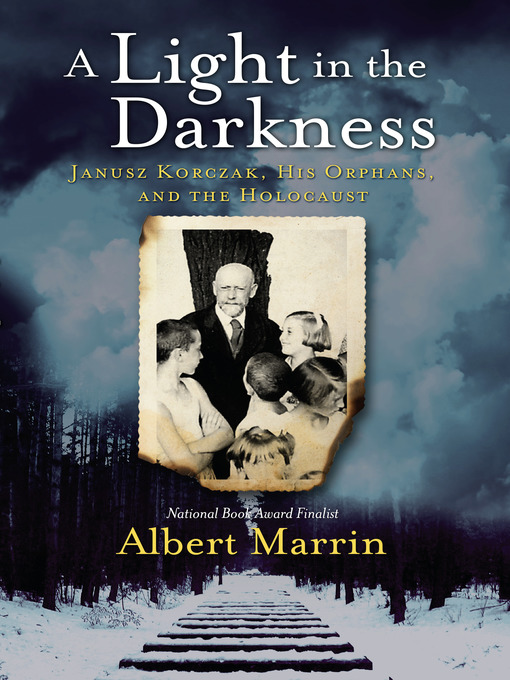 A light in the darkness Janusz Korczak, his orphans, and the Holocaust

Janusz Korczak was more than a good doctor. He was a hero. The Dr. Spock of his day, he established orphanages run on his principle of honoring children and shared his ideas with the public in books and on the radio. He famously said that "children are not the people of tomorrow, but people today." Korczak was a man ahead of his time, whose work ultimately became the basis for the U.N. Declaration of the Rights of the Child. Korczak was also a Polish Jew on the eve of World War II. He turned down multiple opportunities for escape, standing by the children in his orphanage as they became confined to the Warsaw Ghetto. Dressing them in their Sabbath finest, he led their march to the trains and ultimately perished with his children in Treblinka. But this book is much more than a biography. In it, renowned nonfiction master Albert Marrin examines not just Janusz Korczak's life but his ideology of children : that children are valuable in and of themselves, as individuals. He contrasts this with Adolf Hitler's life and his ideology of children : that children are nothing more than tools of the state. And throughout, Marrin draws readers into the Warsaw Ghetto. What it was like. How it was run. How Jews within and Poles without responded. Who worked to save lives and who tried to enrich themselves on other people's suffering. And how one man came to represent the conscience and the soul of humanity. Filled with black-and-white photographs, this is an unforgettable portrait of a man whose compassion in even the darkest hours reminds us what is possible.

Prologue: The two saddest nations on earth
The old doctor
The hater
The heart of the tragedy
A dream so terrible
Written in smoke and ashes
Reckonings.