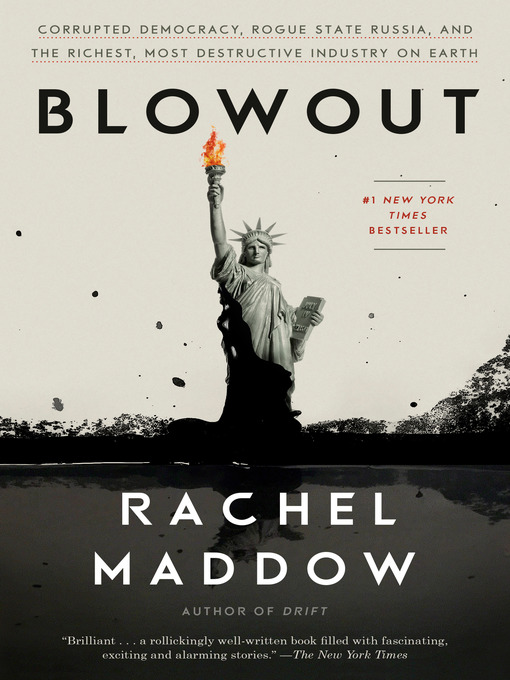 "Rachel Maddow's Blowout offers a dark, serpentine, riveting tour of the unimaginably lucrative and corrupt oil-and-gas industry. With her trademark black humor, Maddow takes us on a switchback journey around the globe-from Oklahoma City to Siberia to Equatorial Guinea-exposing the greed and incompetence of Big Oil and Gas. She shows how Russia's rich reserves of crude have, paradoxically, stunted its growth, forcing Putin to maintain his power by spreading Russia's rot into its rivals, its neighbors, the United States, and the West's most important alliances. Chevron, BP, and a host of other industry players get their star turn, but ExxonMobil and the deceptively well-behaved Rex Tillerson emerge as two of the past century's most consequential corporate villains. The oil-and-gas industry has weakened democracies in developed and developing countries, fouled oceans and rivers, and propped up authoritarian thieves and killers. But being outraged at it is, according to Maddow, "like being indignant when a lion takes down and eats a gazelle. You can't really blame the lion. It's in her nature.""--

Introduction: In a surrealist landscape
Splendor and fragrance
The genie
Stolen goods
Charlie Hustle
Thunder up!
Rex shrugged
A risk management problem
Poster boy
Practical realities
Who does that?
The other 1 percent
Ultrahazardous activity
A significant strategic step
Trust
The handsome hero
This ain't no disco
Such a man is born once every few decades
Putin zassal
All hail the mercenaries
His idea of America
Because they could
"We greatly value our relationship"
Pobeda!
"Yeah that was crazy"
Active appreciation
It all ties back
"All they have is this"
"Constituency trumps everything"
Containment