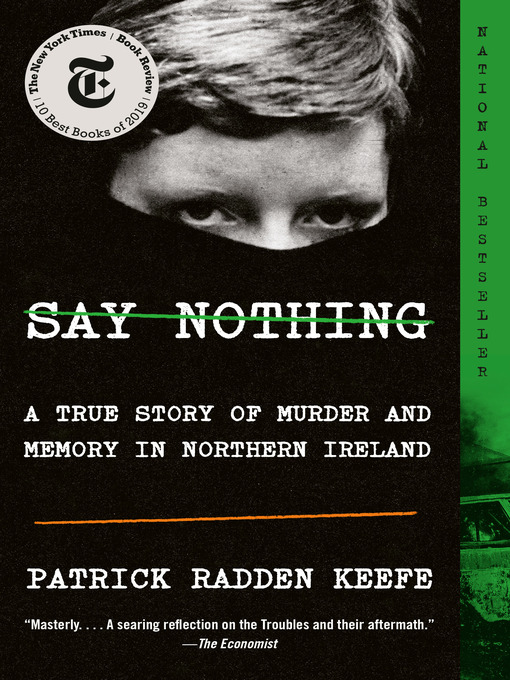 "A stunning, intricate narrative about a notorious killing in Northern Ireland and its devastating repercussions. In December 1972, Jean McConville, a thirty-eight-year-old mother of ten, was dragged from her Belfast home by masked intruders, her children clinging to her legs. They never saw her again. Her abduction was one of the most notorious episodes of the vicious conflict known as The Troubles. Everyone in the neighborhood knew the I.R.A. was responsible. But in a climate of fear and paranoia, no one would speak of it. In 2003, five years after an accord brought an uneasy peace to Northern Ireland, a set of human bones was discovered on a beach. McConville's children knew it was their mother when they were told a blue safety pin was attached to the dress."--

Prologue: The treasure room
Book one: The clear, clean, sheer thing. An abduction ; Albert's daughters ; Evacuation ; An underground army ; St. Jude's walk ; The dirty dozen ; The little brigadier ; The cracked cup ; Orphans ; The Freds
Book two: Human sacrifice. Close England! ; The Belfast Ten ; The toy salesman ; The ultimate weapon ; Captives ; A clockwork doll ; Field day ; The bloody envelope ; Blue ribbons
Book three: A reckoning. A secret archive ; On the ledge ; Touts ; Bog queen ; An entanglement of lies ; The last gun ; The mystery radio ; The Boston tapes ; Death by misadventure ; This is the past ; The unknown.