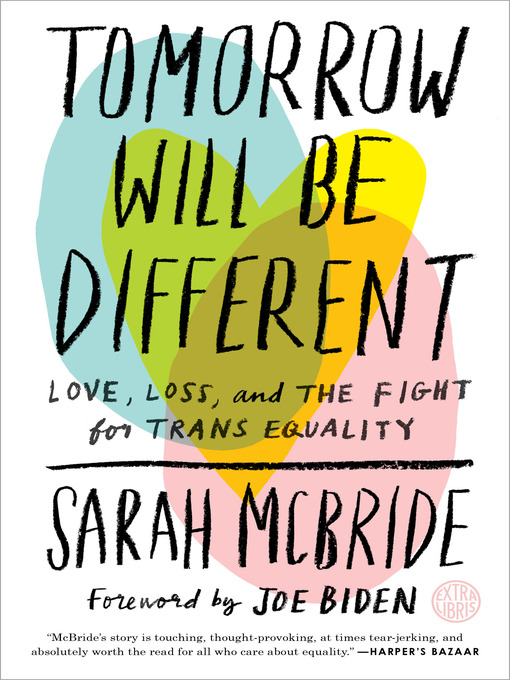 Tomorrow will be different love, loss, and the fight for trans equality

"A brave, powerful memoir" (People) that will change the way we look at identity and equality in this country, from the activist running to become the first openly transgender state senator in U.S. history"The energy and vigor Sarah has brought to the fight for equality is ever present in this book."—Senator Kamala Harris, New York Times bestselling author of The Truths We Hold Foreword by Joe BidenBefore she became the first transgender person to speak at a national political convention in 2016 at the age of twenty-six, Sarah McBride struggled with the decision to come out—not just to her family but to the students of American University, where she was serving as student body president. She'd known she was a girl from her earliest memories, but it wasn't until the Facebook post announcing her truth went viral that she realized just how much impact her story could have on the country.Four years later, McBride was one of the nation's most prominent transgender activists, walking the halls of the White House, advocating inclusive legislation, and addressing the country in the midst of a heated presidential election. She had also found her first love and future husband, Andy, a trans man and fellow activist, who complemented her in every way . . . until cancer tragically intervened.Informative, heartbreaking, and profoundly empowering, Tomorrow Will Be Different is McBride's story of love and loss and a powerful entry point into the LGBTQ community's battle for equal rights and what it means to be openly transgender. From issues like bathroom access to health care to gender in America, McBride weaves the important political and cultural milestones into a personal journey that will open hearts and change minds.As McBride urges: "We must never be a country that says there's only one way to love, only one way to look, and only one way to live."The fight for equality and freedom has only just begun.