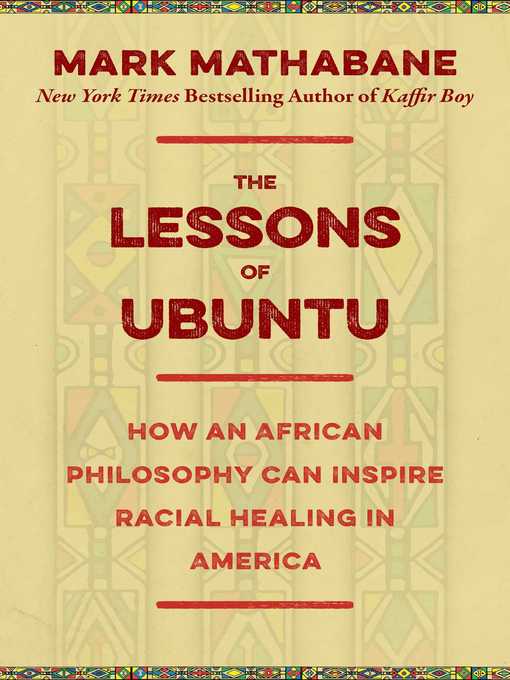 A roadmap to healing America's wounds, bridging the racial divide, and diminishing our anger.Mathabane touched the hearts of millions of people around the world with his powerful memoir, Kaffir Boy, about growing up under apartheid in South Africa and was praised by Oprah Winfrey and Bill Clinton. In his new book, The Lessons of Ubuntu: How an African Philosophy Can Inspire Racial Healing in America, Mathabane draws on his experiences with racism and racial healing in both Africa and America, where he has lived for the past thirty-seven years, to provide a timely and provocative approach to the search for solutions to America's biggest and most intractable social problem: the divide between the races.In his new book, Mathabane tells what each of us can do to become agents for racial healing and justice by learning how to practice the ten principles of Ubuntu, an African philosophy based on the concept of our shared humanity. The book's chapters on obstacles correlate to chapters on Ubuntu principles: The Teaching of Hatred vs. Empathy Racial Classification vs. Compromise Profiling vs. Learning Mutual Distrust vs. Nonviolence Black Bigotry vs. Change Dehumanization vs. Fogiveness The Church and White Supremacy vs. Restorative Justice Lack of Empathy vs. Love The Myth That Blacks and Whites Are Monolithic vs. Spirituality Self-Segregation: American Apartheid vs. HopeBy practicing Ubuntu in our daily lives, we can learn that hatred is not innate, that even racists can change, and that diversity is America's greatest strength and the key to ensuring our future.Concerned by the violent protests on university campuses and city streets, and the killing of black men by the police, Mathabane challenges both blacks and whites to use the lessons of Ubuntu to overcome the stereotypes and mistaken beliefs that we have about each other so that we can connect as allies in the quest for racial justice.