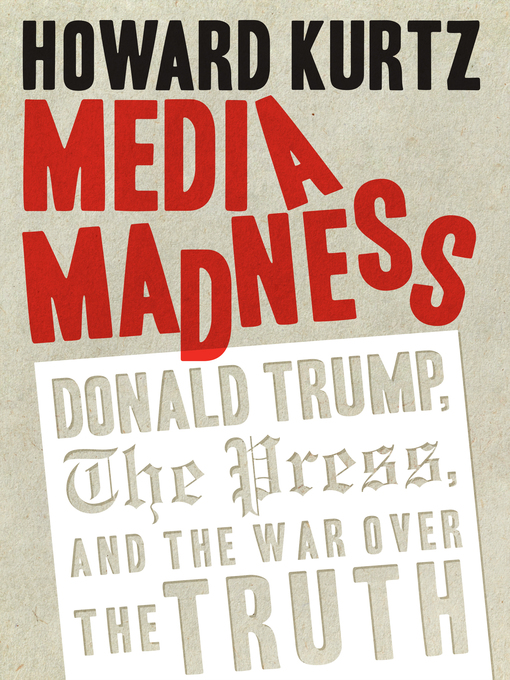 Media madness Donald Trump, the press, and the war over the truth

"According to the media, Donald Trump could never become president. Now many are on a mission to prove he shouldn't be president. The Trump administration and the press are at war -- and as in any war, the first casualty has been truth. Bestselling author Howard Kurtz, host of Fox News's Media Buzz and former Washington Post columnist, offers a stunning exposé of how supposedly objective journalists, alarmed by Trump's success, have moved into the opposing camp. Kurtz's exclusive, in-depth, behind-the-scenes interviews with reporters, anchors, and insiders within the Trump White House reveal the unprecedented hostility between the media and the president they cover." -- From book jacket.

A catastrophic media failure
Trump works the refs
Trump trauma
A question of loyalty
A leaky ship of state
The dossier surfaces
Spicer goes to war
Bannon as Darth Vader
Kellyanne under siege
Trump targets media "enemies"
The war over wiretapping
"The knives are out"
Answering with airstrikes
White House game of thrones
Jared and Ivanka fight back
The Comey firestorm
The media go to DEFCON 1
Collusion confusion
Climate change calamity
The Mueller escalation
Investigative overreach
The secret Russia meeting
The mooch's moment
Charlottesville catastrophe
Tackling the sports world
The fight over "fake news"
The era of harassment.