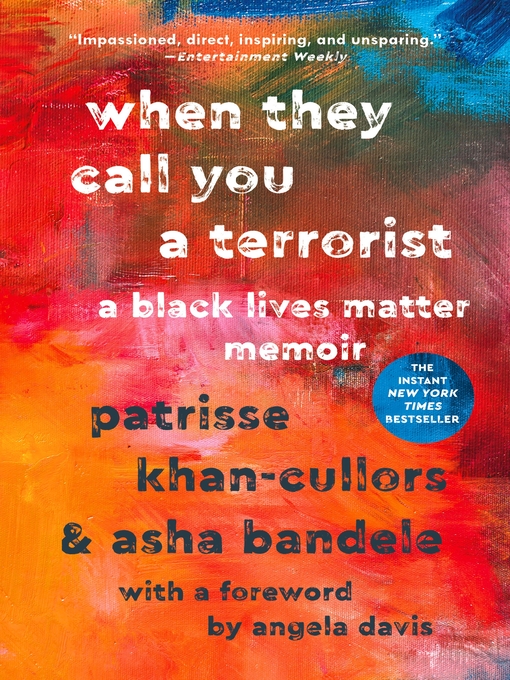 When they call you a terrorist a Black Lives Matter memoir

THE INSTANT NEW YORK TIMES BESTSELLER. New York Times Editor's Pick. Library Journal Best Books of 2019. TIME Magazine's "Best Memoirs of 2018 So Far."O, Oprah's Magazine's "10 Titles to Pick Up Now." Politics & Current Events 2018 O.W.L. Book Awards Winner "This remarkable book reveals what inspired Patrisse's visionary and courageous activism and forces us to face the consequence of the choices our nation made when we criminalized a generation. This book is a must-read for all of us." - Michelle Alexander, New York Times bestselling author of The New Jim CrowA poetic and powerful memoir about what it means to be a Black woman in America—and the co-founding of a movement that demands justice for all in the land of the free.Raised by a single mother in an impoverished neighborhood in Los Angeles, Patrisse Khan-Cullors experienced firsthand the prejudice and persecution Black Americans endure at the hands of law enforcement. For Patrisse, the most vulnerable people in the country are Black people. Deliberately and ruthlessly targeted by a criminal justice system serving a white privilege agenda, Black people are subjected to unjustifiable racial profiling and police brutality. In 2013, when Trayvon Martin's killer went free, Patrisse's outrage led her to co-found Black Lives Matter with Alicia Garza and Opal Tometi.Condemned as terrorists and as a threat to America, these loving women founded a hashtag that birthed the movement to demand accountability from the authorities who continually turn a blind eye to the injustices inflicted upon people of Black and Brown skin. Championing human rights in the face of violent racism, Patrisse is a survivor. She transformed her personal pain into political power, giving voice to a people suffering inequality and a movement fueled by her strength and love to tell the country—and the world—that Black Lives Matter. When They Call You a Terrorist is Patrisse Khan-Cullors and asha bandele's reflection on humanity. It is an empowering account of survival, strength and resilience and a call to action to change the culture that declares innocent Black life expendable.