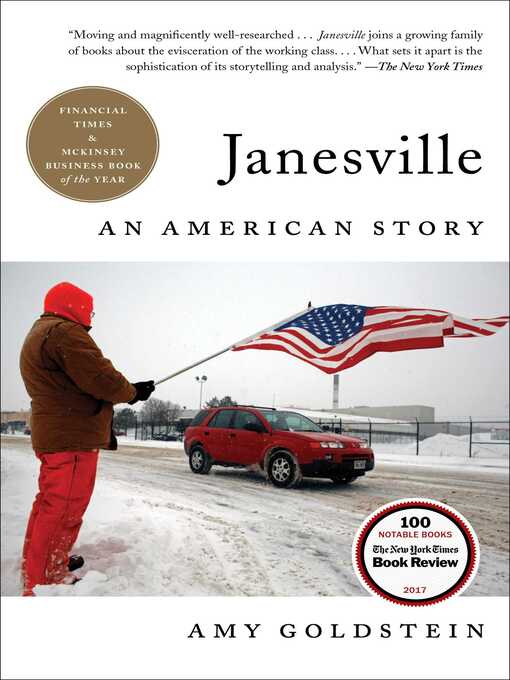 "A Washington Post reporter's intimate account of the fallout from the closing of a General Motors' assembly plant in Janesville, Wisconsin--Paul Ryan's hometown--and a larger story of the hollowing of the American middle class. This is the story of what happens to an industrial town in the American heartland when its factory stills--but it's not the familiar tale. Most observers record the immediate shock of vanished jobs, but few stay around long enough to notice what happens next, when a community with a can-do spirit tries to pick itself up. Pulitzer Prize winner Amy Goldstein has spent years immersed in Janesville, Wisconsin where the nation's oldest operating General Motors plant shut down in the midst of the Great Recession, two days before Christmas of 2008. Now, with intelligence, sympathy, and insight into what connects and divides people in an era of economic upheaval, she makes one of America's biggest political issues human. Her reporting takes the reader deep into the lives of autoworkers, educators, bankers, politicians, and job re-trainers to show why it's so hard in the twenty-first century to recreate a healthy, prosperous working class. For this is not just a Janesville story or a Midwestern story. It's an American story"--

Part one. 2008
A ringing phone
The carp swimming on Main Street
Craig
A retirement party
Change in August
To the Renaissance Center
Mom, what are you going to do?
"When one door of happiness closes, another opens"
The Parker closet
Part two. 2009
Rock County 5.0
The fourth last day
Bidding war
Sonic speed
What does a union man do?
Blackhawk
Ahead of the class
A plan and distress signals
The holiday food drive
Part three. 2010
Last days of Parker Pen
Becoming a gypsy
Family is more important that GM
Honor cords
The day the White House comes to town
Labor Fest 2010
Project 16:49
Figuring it out
Bags of hope
Part four. 1022
The ambassador of optimism
The opposite of a jailer
This is what democracy looks like
On Janesville time
Pride and fear
Labor Fest 2011
Discovering the closet
After the overnight shift
Late night a Woodman's
Part five. 2012
SHINE
Janesville gypsies
A charity gap
Gypsy kids
Recall
A rough summer
The candidate
Labor Fest 2012
Pill bottles
Circle of women
First voe
HealthNet
Out of a job again
Part six. 2013
Two Janesvilles
Night drive
The ebb and flow of work
Project 16:49
Glass more than half full
Graduation weekend
Epilogue.