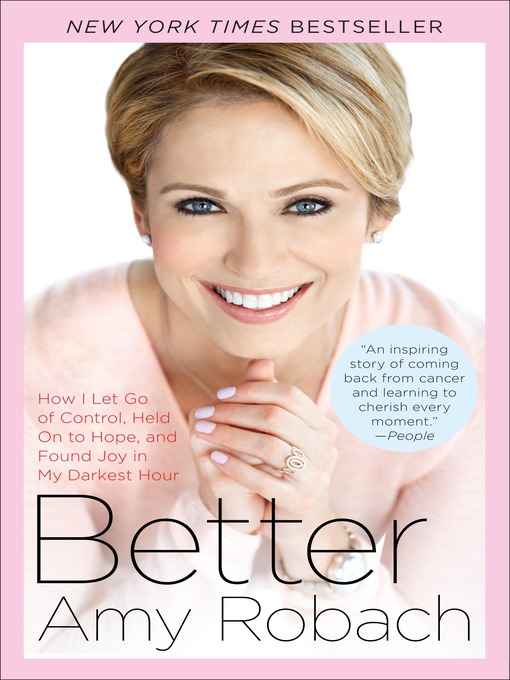 Better how I let go of control, held on to hope, and found joy in my darkest hour

""I have breast cancer." When Good Morning America anchor Amy Robach revealed her shocking diagnosis on live television in November 2013, the seasoned news reporter embarked on the most difficult and illuminating journey of her life. In this intimate memoir, she retraces the twelve months following her brave announcement and speaks candidly, for the first time, about how her illness impacted her family life and her marriage, tapped into her deepest fears and strengths, and transformed her in ways she never could have imagined. Only weeks earlier, in September 2013, ABC producers asked Robach to get an on-air mammogram on GMA to highlight Breast Cancer Awareness Month. Her first instinct was to say no--there was no history of cancer in her family; she was only forty years old; and she felt strange drawing attention to herself when she had no personal connection to the issue. (She'd been meaning to get her first mammogram that year, but had conveniently "lost" the prescription.) But her colleague Robin Roberts, herself a cancer survivor, convinced her to do it with one simple sentence: "I can pretty much guarantee it will save a life." To Robach's surprise, the life she saved was her own: Tests revealed malignant tumors in her breast, and she immediately underwent a bilateral mastectomy, followed by six months of chemotherapy treatments. But Better is more than a story of illness and recovery. Robach recounts the day she and her husband, Andrew Shue, got the terrible news; the difficulty of telling her two young daughters; and the challenges of carrying on with the everyday duties of parenting, nurturing a fledgling second marriage, and managing a public career. She lays bare the emotional toll of her experience and mines her past for the significant moments that gave her the resilience to face each day. And she describes the incredible support network that lifted her up when she hit bottom. With honesty, humility and humor, Robach connects deeply with women just like her who have struggled with any kind of sudden adversity. But more important, she shares valuable wisdom about the power of the human spirit to endure the worst--and find the way to better"--

A beautiful connection
You want me to do what?
"I promise, I'm not going to die"
"I have breast cancer"
A sixth sense
All grown up by age twenty-three
Listening to my heart
Fireworks
"We need some joy"
"This is me, fighting"
A trucker and a pirate
No longer the girl with the ponytail
"To avoid criticism, say nothing"
Beauty in every instant.