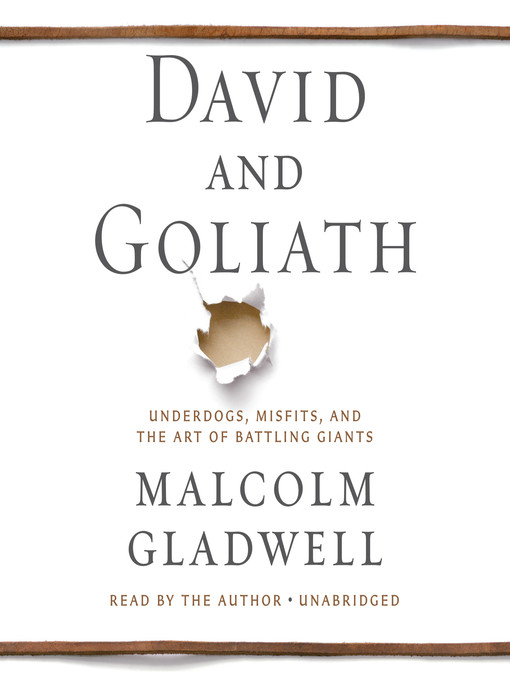 David and Goliath underdogs, misfits, and the art of battling giants

Malcolm Gladwell challenges how we think about obstacles and disadvantages, offering a new interpretation of what it means to be discriminated against, or cope with a disability, or lose a parent, or attend a mediocre school, or suffer from any number of other apparent setbacks.

Goliath : "Am I a dog that you should come to me with sticks?"
The Advantages of Disadvantages (and the Disadvantages of Advantages). Vivek Ranadivé: "It was really random. I mean, my father had never played basketball before." ; Teresa DeBrito: "My largest class was twenty-nine kids. Oh, it was fun." ; Caroline Sacks: "If I'd gone to the University of Maryland, I'd still be in science.
The Theory of Desirable Difficulty. David Boies: You wouldn't wish dyslexia on your child. Or would you? ; Emil "Jay" Freireich: "How Jay did it, I don't know." ; Wyatt Walker: "De rabbit is de slickest o' all de animals de Lawd ever made."
The Limits of Power. Rosemary Lawlor: "I wasn't born that way. This was forced upon me." ; Wilma Derksen: "We have all done something dreadful in our lives, or have felt the urge to." ; André Trocmé: "We feel obliged to tell you that there are among us a certain number of Jews."