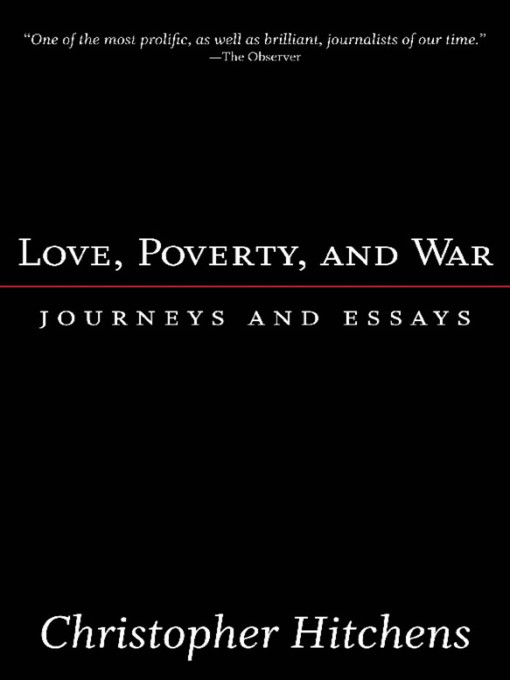 Showcases America's leading polemicist's rejection of consensus and cliché, whether he's reporting from abroad in Indonesia, Kurdistan, Iraq, North Korea, or Cuba, or when his pen is targeted mercilessly at the likes of William Clinton, Mother Theresa ("a fanatic, a fundamentalist and a fraud"), the Dalai Lama, Noam Chomsky, Mel Gibson and Michael Bloomberg. Hitchens began the nineties as a "darling of the Left" but has become more of an "unaffiliated radical" whose targets include those on the Left, who he accuses of "fudging" the issue of military intervention in the Balkans, Afghanistan and Iraq. Yet, as Hitchens shows in his reportage, cultural and literary criticism, and opinion essays from the 1990s to 2004, he has not jumped ship and joined the Right but is faithful to the internationalist, contrarian and democratic ideals that have always informed his work.--From publisher description.

The medals of his defeats
A man of permanent contradictions
The old man
Huxley and Brave New World
Greeneland
Scoop
The man of feeling
The misfortune of poetry
The acutest ear in Paris
Joyce in bloom
The immortal
It happened on Sunset
The ballad of Route 66
The adventures of Augie March
Rebel ghosts
America's poet? : Bob Dylan's achievement
I fought the law in Bloomberg's New York
For Patriot dreams
Martha Inc.
Scenes from an execution
In sickness and by stealth
The strange case of David Irving
Why Americans are not taught history
A hundred years of muggery
Unfairenheit 9/11 : the lies of Michael Moore
Virginity regained
The divine one
The devil and Mother Teresa
Blessed are the phrasemakers
Jewish powers, Jewish peril
The future of an illusion
The gospel according to Mel
The struggle of the Kurds
Thunder in the Black Mountains
Visit to a small planet
Havana can wait
The Clinton-Douglas debates
We're still standing
The morning after
Against rationalization
Of sin, the Left, & Islamic fascism
A rejoinder to Noam Chomsky
Blaming Bin Laden first
The ends of war
Pakistan : on the frontier of apocalypse
Saddam's long good-bye
A liberating experience.