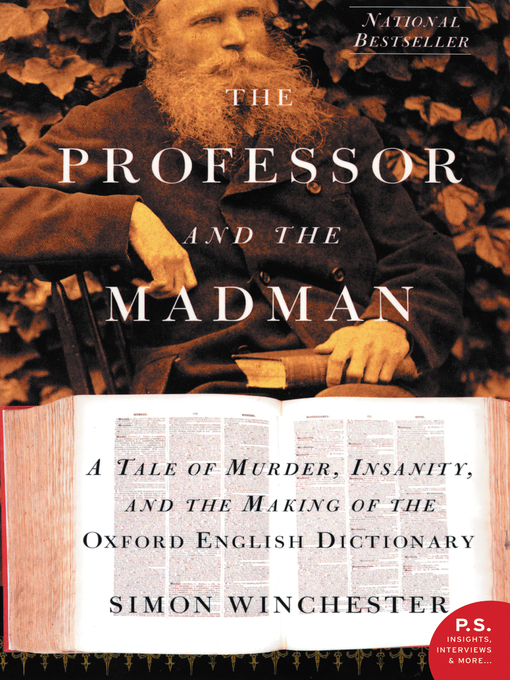 The professor and the madman a tale of murder, insanity, and the making of the Oxford English dictionary

A New York Times Notable Book The Professor and the Madman is an extraordinary tale of madness, genius, and the incredible obsessions of two remarkable men that led to the making of the Oxford English Dictionary—and literary history.The making of the OED was one of the most ambitious projects ever undertaken. As definitions were collected, the overseeing committee, led by Professor James Murray, was stunned to discover that one man, Dr. W. C. Minor, had submitted more than ten thousand. But their surprise would pale in comparison to what they were about to discover when the committee insisted on honoring him. For Dr. Minor, an American Civil War veteran, was also an inmate at an asylum for the criminally insane.Masterfully researched and eloquently written, The Professor and the Madman "is the linguistic detective story of the decade." (William Safire, New York Times Magazine)This P.S. edition features an extra 16 pages of insights into the book, including author interviews, recommended reading, and more.

1. The dead of night in Lambeth Marsh
2. The man who taught Latin to cattle
3. The madness of war
4. Gathering Earth's daughters
5. The big dictionary conceived
6. The scholar in cell block two
7. Entering the lists
8. Annulated, art, brick-tea, buckwheat
9. The meeting of minds
10. The unkindest cut
11. Then only the monuments.